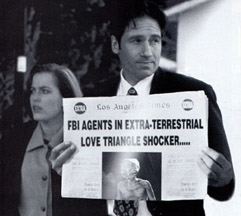 PLEASE NOTE: The stories located in this section contain adult material and are intended for mature readers only!
TITLE: BLACK AND WHITE MAKE RED
AUTHOR: Jenna Tooms
KEYWORDS: Angst, MSR, DSR, character death
SUMMARY: If Mulder had actually died, how would he insure Scully's future without him? In a truly selfless act, Mulder's spirit teaches John Doggett what it really means to love Dana Scully and through this, they all find peace.

TITLE: BLIND FAITH
AUTHOR: TBishop
KEYWORDS: Major angst, UST, RST
SUMMARY: 'There's only one way to stop her... at least, I hope it will... I draw my own weapon and put it to my head. "If you pull that trigger, Scully, you'll be killing both of us."'

TITLE: BRIEF ENCOUNTER
AUTHOR: Unknown
KEYWORDS: X-File, UST, RST
SUMMARY: Mulder pursues another shape-shifting alien...This one is' female, and knows exactly what shape to take to get to him!

TITLE: THE BRIGHT WHITE PLACE
AUTHOR: Nancy Nivling
KEYWORDS: X-File, MAJOR angst, UST, RST, V
SUMMARY: Mulder's enemies reuse an unexpected--and unimaginable--weapon to control him: his own mind...And while he succumbs to their manipulations, Scully searches for the truth alone--unaware that he may already be too far gone to save.

TITLE: CRAWL SPACE
AUTHOR: Gwendolyn
KEYWORDS: Angst, UST, RST
SUMMARY: Mulder and Scully have found themselves in tight spots before...but none quite like this!

TITLE: DEATH AND DESIRE
AUTHOR: Sue Flaxman
KEYWORDS: Mulder angst, RST
SUMMARY: When Mulder is forced to shoot a young girl in order to save Scully's life, they both struggle with the aftermath...Mulder with his overwhelming guilt and Scully with watching him slowly shatter.

TITLE: THE HOLLOW MAN
AUTHOR: Madeleine Partous
KEYWORDS: Major Mulder angst
SUMMARY: Mulder faces his nemesis -- and it's not what he expected.

TITLE: IMPULSE
AUTHOR: Suzanne Schram
KEYWORDS: X-Fle, Angst, UST, RST
SUMMARY: Mulder and Scully investigate some stange doings in a little town where people seem to have no control over their actions.

TITLE: LOSS OF CONTROL
AUTHOR: Joann Humbly
KEYWORDS: Mulder angst, UST, RST
SUMMARY: Mulder takes over VCS following the death of a former lover. But when a serious lack of communication with Scully haunts him to the extreme, he may not only loose her...he may his life.

TITLE: MIDWINTER THAW
AUTHOR: Lydia Bower
KEYWORDS: casefile, Mulder angst, UST, RST
SUMMARY: Mulder is losing himself in the mind of a madman. Is Sculy prepared to give him what he needs to find himself?

TITLE: MOURNING THE LIVING
AUTHOR: Lilith
KEYWORDS: Major angst, MSR
SUMMARY: Scully and Mulder, with some help from the Gunmen deal with the aftermath of Mulder's disappearence, presummed death, and return to the world of the living.